Professional metal detector Blackdog HYBRIDSCAN combines the two technologies of induction pulses and VLF. It can work with several kinds of coils and is used to find metals at very deep depths: 15x15"MONOLOOP, 15x15"DD, 1x1m, 1.5x1.5m, and 2x2m. 13x13"MONOLOOP, 13x13"DD. High-grade, military-grade components are used in the detector's construction. This...
$4,399.00

Professional metal detector Blackdog HYBRIDSCAN combines the two technologies of induction pulses and VLF. It can work with several kinds of coils and is used to find metals at very deep depths: 15x15"MONOLOOP, 15x15"DD, 1x1m, 1.5x1.5m, and 2x2m. 13x13"MONOLOOP, 13x13"DD. High-grade, military-grade components are used in the detector's construction. This detector's automatic ground tracking (AUTO-TRACK) and automatic sensitivity adjustment, which adjusts itself to ground conditions, are its two most notable features. Despite the detector having a manual control (GROUND), the system (AUTO-TRACK) always adjusts the detector automatically regardless of the control's numerical position.

DELAY: Aids in the removal of small metallic objects found at shallow depths as well as the cancellation of ground mineralization. The lower the value, the greater the depth. Unwanted objects such as bits of aluminum foil, bits of lead, or other metals can be rejected by increasing the value, but the depth of the detector may be affected.TX-BOOST: This control regulates the width of the transmission pulse. When it is set to a high value, the depth increases, but the current consumption rises. To avoid false signals, it is recommended to lower the value for searches in mineralized areas.

FREQ: The term refers to the frequency control, which has a range of 95Hz to 125Hz. If searches are conducted close to power lines or other sources of interference, this control helps in the elimination of electrical interference. With the help of the GAIN setting, we search for a slight threshold level for the best frequency adjustment. If the threshold tone appears to have many changes, we gradually turn the FREQ adjustment control to the right or left until the threshold tone is as crisp as it can be. Level 3 is advised.


VOLUME: The device's volume control is used to control how loud the sound coming from the speaker is. The device's depth is unaffected by this control in any way.

In the event of a mismatch, this button is used to reset the detector. It is advised to press it for two to three seconds after changing any detector parameter.

MENU: Just like the LCD screen, this control is only effective in VLF mode.

POWER: There are three places on this switch. The PI detector is on in the rear position, the VLF in the middle, and the gadget is completely off in the forward position.

According to figures 1 and 2, assemble the frame coil.

Stand within the box while wearing the detector around your neck.

the following settings for the potentiometers

GROUND is Positioned at "10"

Place the box on a spotless surface devoid of any metal objects. Use the POWER switch to turn on the detector. The switch should be in the back position. After pressing and holding the RESET button for three seconds while the detector makes a sound, it should stop making noise. Press the RESET button once more until the detector is silent if it still makes any noise. The detector would be prepared for the search with these settings.

With both hands holding the frame straps, carefully begin to move forward. The DEPTH bar will gradually light up and the detector will beep when it detects a metal object, depending on its size and depth. Small metallic items lying on the surface can be distinguished by the detector.

The item is small and has a depth of up to 50 cm if the tone of the signal fluctuates sharply in a narrow area.

As illustrated in Fig. 3, a medium-sized object has been discovered at a depth of up to 3 meters when the signal tone increases in a medium-sized area before slowly decreasing again.

As illustrated in Fig. 4, when the signal tone gradually declines after increasing across a vast area, it indicates the discovery of a medium-sized object at a depth of up to 8 meters. 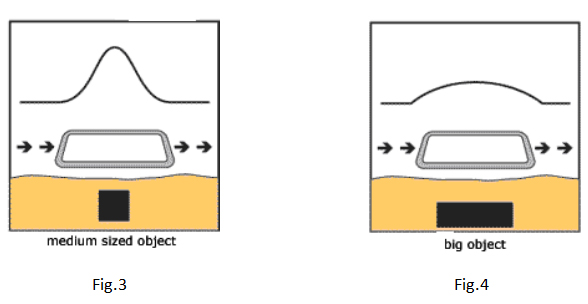 You must set the GROUND potentiometer to position "9" if the search is being conducted in an area with significant mineralization in order to mitigate its impacts. Increase the DELAY value while decreasing the TX-BOOST and GAIN values to lessen the effects if the ground is overly mineralized.

With the use of the FREQ control, you can lessen the impacts of interference on the detector when searching close to power lines. 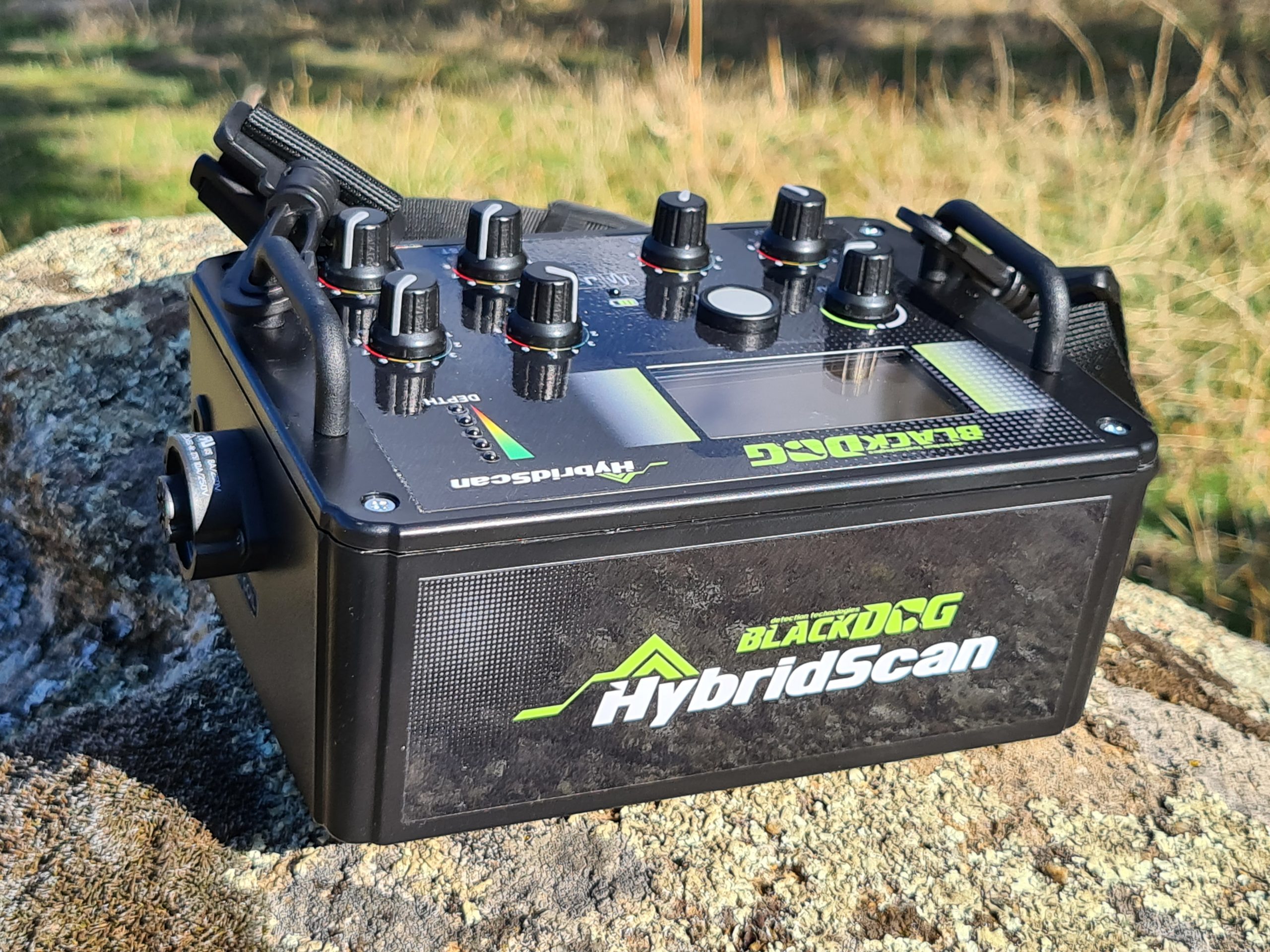 Depending on the numerical position of the TX-BOOST button, the detector's extremely powerful 3400mAh LI-ION battery may operate independently for 15 to 30 hours of searching. When the battery level LED illuminates, you should recharge the detector. Until the charger indicator turns green, the charging process takes about 3 to 4 hours. The charger that is provided is automatic and secure.

Never attempt to charge the batteries using a charger other than the one provided by the manufacturer to avoid voiding the detector's warranty.

Cleaning the detector is advised with a wet cotton cloth. Chemical products should not be used since they could harm the aesthetics of the device and its accessories.

In any room at home where there are metallic objects, never use the detector.

Never touch the detector inside. 500 Volts of electrocution risk.

If the frame coil is not deployed, do not turn on the detector as it will be harmed. The frame coil cannot be submerged in water because it is not submersible.

Using the plastic screw that is included, mount the DD coil on the telescoping crutch.

Suspend the detector from your neck.

With the POWER switch in the forward position, turn the detector on. The detector's display will switch on and show you the main screen three seconds later. To see all the settings on the screen, press the MENU button. Select the first SENS option after entering, then hit the MENU button. You'll see a 0–9 scale. Turn the MENU button to the right or left to choose the desired level. Press the MENU button after selecting the desired level, and "OK" will appear on the display. With each setting, we perform this action once more. Press EXIT once you have completed modifying all the parameters. The main screen will show up after all settings have been automatically saved.